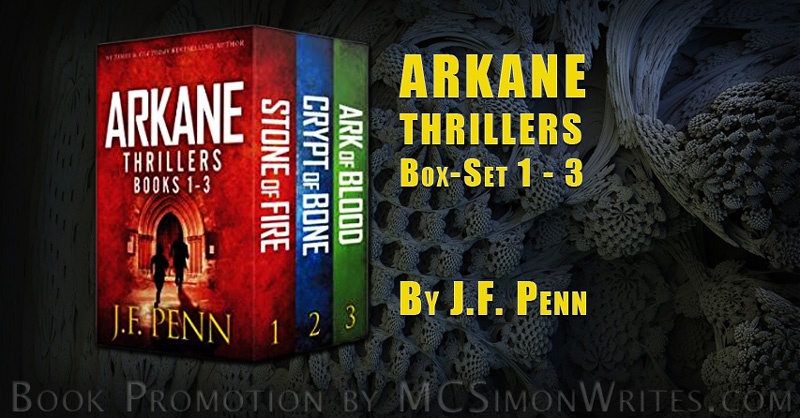 In a nutshell… I just closed the pages of the trilogy, and I am stunned sitting in my chair. While my heart still races, my eyes look to the screen as lots of thoughts invaded my mind. I am not sure if I just read a non-fiction or fiction book. I am not sure if… I am not sure of anything at this moment. Joanna Penn’s books opened in front of my internal eyes such a deep world that I do not know where to begin.

I have the feeling that these are the most intriguing books I’ve ever read. And, believe me… I read a lot during this lifetime. In fact, intriguing is not such a powerful word for what I feel right now about this author’s writing. To make you better understand, I can say that all my life I looked for intriguing subjects and I immersed myself in them as much as humanly possible.

There were moments in ARKANE, when the action was so intense that my heart raced like hell. Once you enter inside the story, you cannot do anything other than to be a part of it.

I am impressed with the amount of research that the author had to make to write this book. Amazing work and an amazing writer!
Not only has J.F. Penn done so much research, not only is the action and her writing style keeping you stitched to the book forgetting even where you are, not only does she reveal old secrets, but behind her words you enter into a very deep world, into the core of a hidden wisdom.

If you want a boring book, do not read Joanna’s Penn writings. Rather, if you want your heart to pound at the turn of every ten pages, if you need adrenaline in your life, if you need your brain to dig into some mysteries, go and grab the ARKANE series. You will get all that you need and more.

“Let it go, Morgan. There are mysteries that we can never solve, that we can only grasp at. ARKANE exists to keep the balance, to make sure that these mysteries don’t emerge and disrupt a world that isn’t ready for them.” said Jake.

Maybe he’s right and… I wonder… is the world ready for Joanna Penn?

“How they found her after so many years she could not fathom, but she knew it was time to hide the stone again. For she was the Keeper…” says the author about Aruna Maria, the nun that ‘opens’ the action.

A Keeper… this was enough for the book to hook me.

When Dr. Morgan Sierra, an ex-Israeli army officer entered the Arkane’s door, I knew this is a book that I NEED to read. I did it, and I was not disappointed. It has all what I would ever want a thriller to have. Revealing many turning points, the book kept me glued to it. I could not close it until it was done.

The author’s style of highlighting the characters, even the villains, is so good that I found myself in everyone’s skin.

When the action moved to Israel, this took me back in time, to my last visit in those places. I was impressed by all the descriptions and at one moment, I realized that the author not only did lot’s of research to write this book, but also went deep in the core of some secrets that not many people know about. I was surprised to find that Joanna Penn knows details about the tomb of Jesus, details that are so secret that even few Israelites know. More than this, I was surprised that she revealed this in her books. From that moment, I tended to read more carefully, focusing on potential secrets, which she covers… or better said, uncovers.

“Stone of Fire” is filled with mystery, fights, adventure, conspiracy, betrayal, dangerous situations, anger, revenge, and most of all… love… love for family, love between man and woman, love for children, love for a lost twin brother, love for a lost husband.

The moment of saving Gemma and Faye was so intense that when everything ended well, I could barely breathe. And suddenly tears came to my eyes.

Somehow, Morgan’s love for her twin sister Faye was similar to Joseph’s love for his twin brother, Michael. Both of them were able to do anything to save their loved ones life. The only difference was that Morgan was on the good side of the story, while Joseph on the bad one.

But finally… who can tell what is good and what is bad in the continuum space and time?

This first volume reminded me of Dan Brown’s “The DaVinci Code”. But… if you ask me… I prefer Joanna’s Penn’s “ARKANE”. Don’t worry, Dan Brown, you are still one of my favorites, but Joanna is simply amazing!

Opening the ARKANE’s second book, I needed some time to adjust myself to the new action. Somehow I felt connected with the 1st book’s action, and my mind rejected the new characters for a while.

But, this didn’t last long because Morgan’s presence assured me that a great new action was about to start.

Again, my heart trembled when through the author’s words I witnessed the child’s sacrifice done by Thanatos in the church. It was horrible. Joanna’s power is very big describing crazy people enslaved by criminal rituals. I have to admit that I felt somehow lost and dizzy between so many atrocities.

When Morgan appeared again on the scene, I felt so relieved. Especially since beside her stays the same Jake. Together they form the perfect team. I love the synchronization between their bodies and minds. The author does such a good job.

If, for the first book in the series Joanna Penn had to do lots of historical research, for this second volume, the medical research that she did was amazing.

I found myself thrown into a medical global conspiracy, and even if let’s say that all of it is fiction… I couldn’t stop asking myself, “what if it is real?”

When the story almost reached the end, I had a weird feeling. I was so immersed in it that I had a feeling that I am connected with a god… with Joanna Penn’s mind and heart. This was an incredible feeling, and even if I am a book devourer and have been for almost half a century on this planet, I can swear this never happened to me until now.

The Arkane’s third book will not disappoint the reader already hooked by the other two volumes.

An incursion into the world of international terrorism, into the depth of criminal rituals, obsessed and crazy people who had a lot of power in this world, an incursion into psychology… the book is astonishing.

The main action takes place in Egypt. This area is a special one for me, so my attention was even more focused on the action and details. While the heroes were moving from one place to another, it seemed to be so real for me because some of them were places where my feet had also walked a long time ago, where my eyes also looked for details and where my heart was also beating faster.

When paranormal facts were again introduced, my brain reached its maximum of attention. The talk about parallel dimensions being one of my favorites, transcending time and space subject grabbed my heart and mind.

Bringing the wisdom of Kabbalah to the table also, mixing masonry history, the author left me almost stupefied. I was not very sure anymore if to pay attention to the action in itself or to what Joanna Penn added behind the words. I suddenly had a feeling that I want to dig more into the author’s private world, I wished to transform her into a study subject.

At that moment, my whole mind was hooked by a single question, “Who is in fact Joanna Penn?”

I wonder… maybe it would be better to read her books again… now seeing them with new eyes.

New York Times and USA Today Bestselling Author of thrillers with a supernatural edge. Oxford educated, British born J.F.Penn has traveled the world in her study of religion and psychology. She brings these obsessions as well as a love for thrillers and an interest in the supernatural to her writing.

She’s also a professional speaker and entrepreneur, voted as one of The Guardian UK Top 100 creative professionals 2013.

Joanna Penn loves reading and always dreamed of writing her own books, but she spent many years thinking about it before she actually took the plunge. However, she did write a lot of journals during her many years as a corporate business consultant.

J.F. Penn has a Masters degree in Theology from the University of Oxford, Mansfield College and also a Graduate Diploma in Psychology – both interests are entwined into her writing.

She’s married and lives with her husband in South London, England. She’s a cat lover and enjoys a glass of pinot noir along with chocolate as her main vice. J.F. Penn walks a lot and travelling is her main addiction.