A Rebel Among Us

How can a beginner writer overcome his/her fears?

My advice to every writer is this: if you believe in your craft, take the plunge. When I published my first novel, I had no idea what to do next. I only knew I had a good book because of what relatives had told me. My book was self-published, so I was responsible for promotion. I started writing a blog to develop a brand for myself, and set up a blog tour. I created a website and author pages on Amazon, Facebook, and Goodreads. And I got to know local reporters, so that when my book launched at a local library, I had lots of media coverage. At first, I did many local book signings to get my name out there and meet people. I also spoke in front of several groups. This was hardest thing for me, because even though I had performed in front of audiences by singing and playing guitar, I had never given a talk. But the more I spoke, the more comfortable I became. I also got interviewed on local TV and radio shows. Basically, I never quit publicizing.

Now I participate in writing groups on Goodreads, LinkedIn, Facebook, and Library Thing, and I guest blog as well. I am doing nationally syndicated podcasts, and my new book, A Rebel Among Us, is scheduled to appear in national publications that are specific to the Civil War.

Subscribe to magazines and blogs that are relevant to your genre. Read what other authors are writing in your genre, as well as what is selling right now. Know who your target audience is. You can learn this by checking out Facebook and Twitter logistics. I write about something I grew passionate about, which I believe shines through in my novels. I wasn’t concerned about selling the latest fad like vampires or New Adult. Mostly, I concentrated on learning everything I could about what I was writing about and brought it to life. I write what I believe in. Every author is different, so dig out your own niche. And never give up! 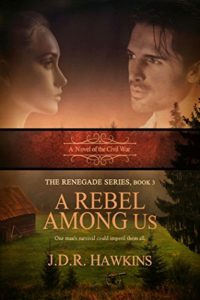 After David Summers enlists with the Confederate cavalry, his delusion of chivalry is soon crushed when he witnesses the horrors of battle. Shot by a Union picket, he winds up at a stranger’s farm. Four girls compassionately nurse him back to health. David learns his comrades have deserted him in Pennsylvania following the Battle of Gettysburg, but his dilemma becomes much worse. He falls in love with the older sister, Anna, who entices him with a proposition. To his dismay, he must make a decision. Should he stay and help Anna with her underhanded plan, or return to the army and risk capture?

During the bloody American Civil War, the stark reality of death leads one young man on a course of revenge that takes him from his quiet farm in northern Alabama to the horrific battlefields of Virginia and Pennsylvania.
On Christmas Eve 1862, David Summers hears the dreaded news: his father has perished at the Battle of Fredericksburg. Reeling with grief and thoughts of vengeance, David enlists and sets off for Richmond to join the Confederate Army of Northern Virginia.

But once in the cavalry, David’s life changes drastically, and his dream of glamorous chivalry becomes nothing but a cold, cruel existence of pain and suffering. He is hurled into one battle after another, and his desire for revenge wanes when he experiences first-hand the catastrophes of war.

A haunting look at the human side of one of America’s most tragic conflicts, “A Beckoning Hellfire “speaks to the delusion of war’s idealism.

Hawkins should be nicknamed `Arachne’ for the beautiful tapestries she weaves of the Civil War. Without a doubt, 5/5 stars. ~ Susan Barton

The author gives the reader a realistic view of the horrors of the battlefield, along with the characters’ reactions to all that happens around them. ~ Elaine

In the spring of 1861, a country once united is fractured by war. Half of America fights for the Confederate cause; the other, for unification. Rebel forces have already seized Fort Morgan and Fort Gaines, a new Confederate president has been elected, and the Constitution has been revised. In north Alabama, a farmer and father of three decides to enlist. For Hiram Summers, it is the end of everything he has ever known.

After Hiram travels to Virginia with the Fourth Alabama Infantry Regiment, he is quickly thrust into combat. His son, David, who must stay behind, searches for adventure at home by traipsing to Huntsville with his best friend, Jake Kimball, to scrutinize invading Yankees. Meanwhile, Caroline – Hiram’s wife and David’s mother – struggles to keep up with the farm as her world revolves around the letters she receives from her husband, whom she misses dearly. As Hiram and his son discover the true meaning of war, they soon realize that their choices have torn their family apart.

In this historical tale, the naïveté of a young country is tested, a father sacrifices everything to defend his home, and a young man longs for adventure – regardless of the perilous cost.

Civil war tore families apart, and many of those families fought to stay together every step of the way. “A Beautiful Glittering Lie” is a novel of the American Civil War, as J.D.R. Hawkins writes of the Summers family and the rift the war brought to their family. Drawing on her heritage to tell the tale, Hawkins presents an insightful and riveting read of a family at war. “A Beautiful Glittering Lie” is a strong pick for historical fiction collections. ~ Able Greenspan- Reviewer, Midwest Book Review

J.D.R. Hawkins is an award-winning author who has written for newspapers, magazines, newsletters, e-zines, and blogs. She is one of a few female Civil War authors, uniquely describing the front lines from a Confederate perspective.

Her Renegade Series includes A Beautiful Glittering Lie, A Beckoning Hellfire, and A Rebel Among Us. All three novels are award winners, and tell the story of a family from north Alabama who experience immeasurable pain when their lives are dramatically changed by the war. Ms. Hawkins is a member of the United Daughters of the Confederacy, the International Women’s Writing Guild, Rocky Mountain Fiction Writers, and Pikes Peak Writers. She is also an artist and singer/songwriter. Ms. Hawkins is currently working on a nonfiction book about the War Between the States, as well as another sequel to her series.