You are a writer.

You are a talented, inspired, brilliant writer.

Your heart and mind are painting the paper or the screen with beautiful, deep words.

Your art is ready… right there in front of your eyes… ready to be delivered to your reader’s heart.

To touch your reader’s heart, you must first step through the gate of their mind.

This mind is doing many actions and one of them is hunting errors and mistakes. It is not the reader’s fault, but we, as human beings, are programmed to do this.

Now, tell me… do you want to be an antelope or a lion during this hunting? If you prefer to be the antelope-writer, the solution you have is to write, edit, proofread, format, publish… and a few other challenges on the way. Nevertheless, if you want to be a lion, after your book has covers that can be opened by your readers, you’ll need a Commakaze by your side!

I wondered also some time ago.

The word does not belong to me.

It was revealed to me when I met him in my favorite challenge, the place where I obtained my daily blogging addiction fix, 30 Days Blogging Challenge. Not only did I became addicted, but I met so many wonderful writers, writing coaches, marketing coaches, etc, etc. My world has practically changed, thanks to this challenge.

And then… I met him… Gary Thaller… the Commakaze.

He is an editor, a proofreader, a writer, and much more.

His eyes are never missing a comma.

You cannot trick him.

He is even teaching other writers, on his website, how to fight with his friend called the comma… a friend who can transform itself into your book’s worst nightmare.

This human being is destined to fight with commas.

Like a ninja assaulted by mosquitoes, a commakaze will handle the comma battle.

And… believe me… he will always win against those little, friendly, or annoying markings.

Each time when I had to post a comment to him in the group, a sudden fear enveloped my body.

It is a fear that has brought about the “three dots syndrome” inside me (yes, this is my invention… I hope 🙂 ).

Whenever I am unsure whether I need a comma or not, I add to my writing three dots. This way everything looks more dramatic, and my readers, I like to think, are pleased with the results; but the real reason is that I don’t intend to awaken the commakaze’s fighting instincts. No, he never jumped on any of my text without a formal request, but… I can feel his thoughts.

What is a Comma?

First of all… for me, a comma is something that I thought I handled very well. Until one day… not too long ago… when the one and only real Commakaze I ever met, announced a contest. I jumped inside it, thinking that I will make him say… “Wow! What a brilliant writer… she knows it all… she’s the perfect ‘one man orchestra’!”

What do you think the contest was about?

The task was to discover the missing commas in a sample text.

It is not important to mention if and how many I found.

What I think is more important… is the fact that, after I found whatever I could find, I realized what Hitchcock’s characters, from his movie “Birds”, were feeling.

I, now, see around me only commas.

They are everywhere… screaming, attacking, and asking for their rights. 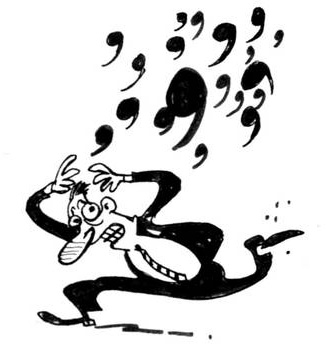 What is a comma?

I don’t know any other English word to express the depth of its essence.

Adding a comma, you can change everything.

Deleting a comma and your book can jump into another plot, other than what you expected it to be.

Therefore, you can confuse the reader easily.

If the reader is confused… this is not a good thing… not good at all.

While trying to finish my variant for the contest, I made some research. I had to extract, and put together all sorts of rules. For this, I found a very good source which I recommend with all my heart, www.grammarly.com.

They say… A comma is a “soft stop”. It is not as final as a period. It is used to connect new ideas to old ones and to tell the reader when to pause for a moment in their thinking (or in their speech, if they’re reading out loud). In long sentences, it is also used to separate clauses, so the reader understands which modifiers apply to which words, etc.

For each rule you see in the list below, you can find more details, here:
www.grammarly.com/handbook/punctuation/comma/ 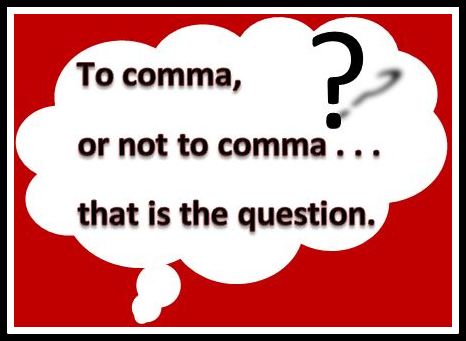 Only listing the rules, and I have a headache.

Do I need to mention what chaos will be in my head if I try to correctly apply all the rules?

Yes, I have a good instinct and I, usually, add commas in all the necessary places, but… will my book be the same if instead of letting my mind fly, I will concentrate on so many other technical details?

Why do I need to bother myself with this?

A book is a book and it needs commas, also.

Who says a writer must be a one-man-orchestra?

Are you a writer?

If you have read up to here, I suppose you are.

Then, do yourself a favor and don’t bother with all the details.

SIMPLIFY
Why the Key to Good Writing is Confidence
Writer’s Block Is a Symptom, Not The Problem…
Writers, Pay it Forward
Take Your Writing Seriously, But Never Yourself…
How To Add Purpose To Your Writing
Employing a Key Psychological Nuance When Writing
Top 3 Things To Avoid When Writing